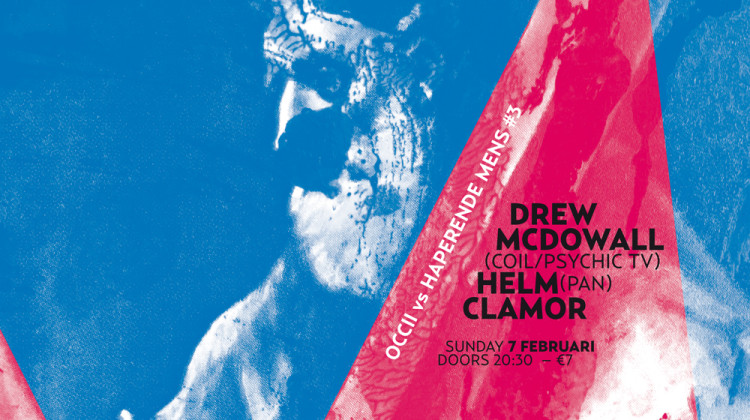 Together with OCCII we are back for our third collaboration on Sunday the 7th of February with a mesmeric triple bill of electronic music pushing at the edges with Drew McDowall (Coil / Psychic TV), Helm and Clamor. Make sure not to miss this!

McDowall formed art-punk trio Poems in 1978 with his then-wife, Rose McDowall. During the 1980s, McDowall was a member of Psychic TV. McDowall performed with Coil regularly for several years, becoming an official member in 1994. McDowall currently is a member of the groups CSD (formerly Captain Sons and Daughters) and Compound Eye (with Tres Warren of Psychic Ills). The notoriously reclusive musician, who resides in New York City, has done a number of public performances for the Modular Synthesizer Solstice and Equinox series in Brooklyn, beginning in 2012. In March 2014, McDowall provided the score to Are You Okay, a short film written by Bret Easton Ellis for the “Are You Okay?” single by Dum Dum Girls. Helm is a sound artist and experimental musician based in London, working with a vast array of revolving instrumentation and abstract sound sources. He has produced four full-length albums and three EPs consisting of dense compositions which explore the relationship between acoustic and electronic derived sounds. Helm’s initial influences were derived from a range of 20th and 21st century avant-garde and experimental music, yet recently the project has grown to incorporate elements from other forms of electronic music such as post-industrial and various strains of dance music. He has also performed extensively across Europe and the USA in various different contexts, including many festival dates and North American and European tours with Danish band Iceage. In 2015 Helm released ‘Olympic Mess’ on PAN, his most substantial and highly acclaimed record to date. Where his previous effort, 2014’s ‘The Hollow Organ,’ dealt in dense, distressed sonics, ‘Olympic Mess’ is Younger responding to a period spent engaged with loop-based industrial music, dub techno, and balearic disco. These musical references, all of which can induce hypnotic states and feelings of euphoria, inform ten evocative aural landscapes which unfurl over the course of an hour and act almost as a counterpoint to the turmoil that spawned them. “It’s about exploring a perverse desire to pull the rug from under yourself, and the struggle to achieve a healthy equilibrium between one’s personal and artistic lives,” Younger says. “Dealing with the problematic consequences of pushing your own limits, forming and dissolving relationships, transient lifestyles, physical and mental exhaustion, excess, and other kinds of personal chaos”. Crafted using an array of heavily processed samples, found sound and electroacoustics, personal conflict manifests in “I Exist In A Fog” and “Outerzone 2015,” where visceral noise disintegrates into veiled, ambient strata. The disquieting crescendos of “The Evening In Reverse” and “Fluid Cloak” offer no such relief, while the title track and “Don’t Lick The Jacket” are mineral, multilayered abstractions twisting around a brittle pulse.

‘There’s a human being behind those machines’ an interview with Helm, Fact
http://www.factmag.com/2015/06/20/helm-interview-olympic-mess-pan/

A duo founded in 2015 by two comrades with a mutual love for the industrial tradition. Channeling the classic sounds of muffled death industrial as well as fierce power electronics into a beast of it’s own. Over their short existence they’ve played alongside Damien Dubrovnik, Hive Mind, Neutral, Dave Phillips, Arv & Miljö, Cremation Lily and more likeminded souls. Both members are active in a variety of projects such as Qualm, Svartvit, Empty Front & Folteraar. A loud uproar, as from a crowd of people.