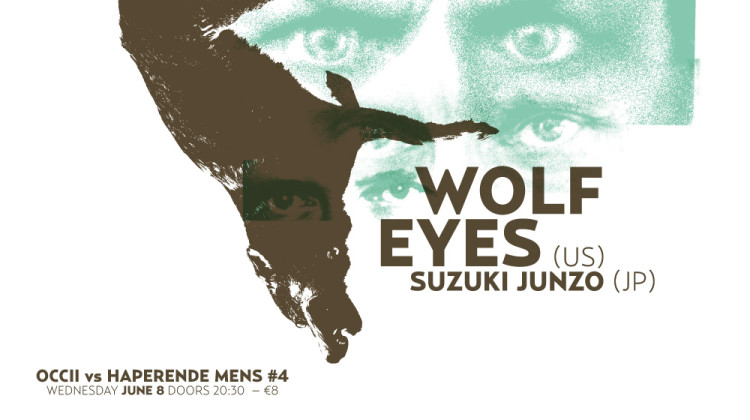 For the fourth time Haperende Mens teams up with OCCII for an alien and pitchdarkly obscure double bill of sound and confusion with:

‘Born in the dead, dread-filled haunted hills of Michigan, Wolf Eyes are the rabid beasts of Trip Metal & have been plowing thru new tunnels of the underworld since 1997. Pure audio stunt, homemade post-nuclear terror & claustrophobic atmospheres — the most shattered and confusing horror vision since Bo Diddley dropped the duct taped warhead on all humans in 2024.’ – Wolf Eyes

The infamous blistering noise of Wolf Eyes propelled them from being a basement sensation to the finest ranks of Sub Pop without ever losing a shred of credibility. Originally started as the solo project of former Nate Young, he was soon joined by Aaron Dilloway in 1998, John Olson in 2000 then Mike Connenlly and now Crazy Jim. They has released over 150 recordings in their relatively short lifespan, on labels such as Bulb Records, Troubleman Unlimited, Fusetron, and Sub Pop, as well as on Olson’s American Tapes label, Dilloway’s Hanson Records, Mike Connelly’s Gods of Tundra label and Nate Young’s AA Records.
Their stunning new album “I am a problem: mind in pieces” is now out on Jack White’s Third Man Records.

‘Wolf Eyes have always had a B-movie aura. They’re like the Roger Corman of underground music, churning out releases, inspiring other low-budget noise-auteurs, galvanizing scenes both locally in Michigan and globally in festivals and collaborations. Many of their blunt album titles have a schlock-horror feel: Slicer, Dread, Burned Mind, Human Animal. That feel is in the music too. At turns scary, funny, dramatic, and transfixing, Wolf Eyes’ morphing sound has one constant: creepy, thick tension.’  – pitchfork 2015 album review