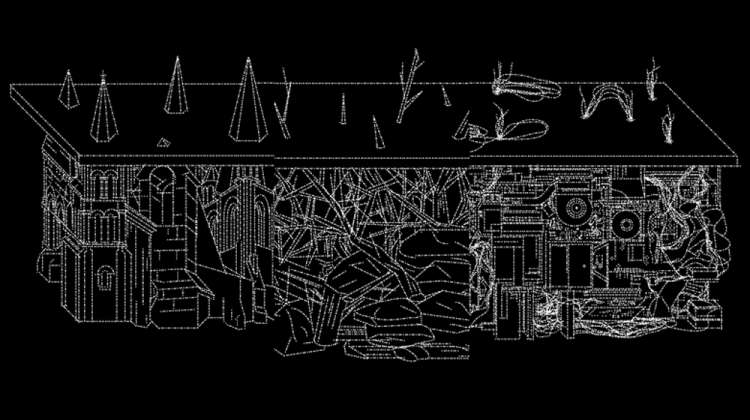 On Saturday 13 January between 13:00 – 16:35 at WORM Rotterdam you can join the Academy of the Sacred, where we will explore the theoretical and social implications of our project with lectures and talks.

Spider, Spit and Broken Bells -PART 2- Haperende Mens Festival started as an attempt to create a dialogue between experimental music and media art/theory cultures. The Festival’s very aim became to create a multidisciplinary event to explore from different perspectives traces of the relevance of Bataille’s notion of the Sacred as a form of community formation in the context of an ever-increasing technologically mediated culture.

Following is a brief introduction to our theoretical starting points – our own, so to say, traces of the Sacred – as well as a list of speakers and lectures.

“Men, assembling for a sacrifice and for a festival, satisfy their need to expend a vital excess. The sacrificial laceration that opens a festival is a liberating laceration. The individual who participates in loss is obscurely aware that this loss engenders the community that supports him.”

George Bataille’s own criticism of technology is ruthless. In a divided world (world of things vs living beings) men is not only responsible for this split, but also finds itself on the wrong side of the divide. The Symposium takes this challenge as its very starting point, asking: could the form of ‘loss’ at the basis of the ‘sacred community’ come to resist the determinism of a technologically mediated culture? Through an eclectic selection of theoretical investigations from the most disparate of backgrounds, the Symposium proposes a research into aesthetical experiences and social bonds that are not subject to recuperation, accumulation or production, but able to question both the normative humanist subject and the very expenditures of capital which he co-creates.

A research advisor for Haperende Mens, Houtermans is an experienced curator and art & culture theorist, with a special interest in Bataille’s work and its (possible) influence on contemporary art and society. Also a passionate musician, Nathalie is a vocalist and songwriter, developing collaborative projects with music varying from punk blues and noise to lo-fi experimental techno. Currently she is Research Tutor at the Willem de Kooning Academie in Rotterdam.

Jan Robert Leegte lives and works in Amsterdam. He is among the first artists who were involved in the 90s NetArt movement. A recurring theme in his work is the sculptural materiality of interfaces of computer programs. Recent exhibitions include, amongst others, ‘Electronic Superhighway’ at Whitechapel Gallery in London, and ‘Open Codes’ at ZKM Karlsruhe.

“Inner life / inner death: On The Sonic Threshold of The Sacred”

Masciandaro (professor at CUNY Brooklyn College, NYC, US) is a writer and theorist in the spheres of medieval literature and mysticism. Some principal themes of his work are: individuation, sorrow, decapitation, commentary, metal, alpinism, love, anagogy, and paradise. His essays have appeared in a variety of journals (Qui Parle, Cyclops, Collapse et al.) and his recent books include ‘Floating Tomb: Black Metal Theory’ (Mimesis, 2015) and ‘SACER’ (Schism, 2017). In 2018, Mimesis will publish his current project, ‘On the Darkness of the Will’.

The usefulness of Lectures on Saturday 13

Grootveld started doing pirate television in Amsterdam with PKP TV and Rabotnik TV in the early eighties. In the mid-80s he contributed in organizing major media-conferences, such as the European Media Festival in 1985, followed by the Wetware Convention (1991). Menno currently works as a translator and a journalist, and runs his own publishing house in Amsterdam.